Wig is a little thin in the back but overall so amazing! Easy to brush and doesn’t tangle bad ! 10/10 recommend

Bought the wig when it was released, it said that the wig and headband was sold as a set and there was no option to pick one or the another.
Then dokidoki changed that and I only received the wig, so had to pay for the horns and shipping again. Got 5$ in refund for the trouble, but still felt pretty played.
They said they had made a typo and changed that when they noticed. Which was almost 2 weeks after the release of the wig, sus if you ask me. Considering you now make at least 15$ extra for every pair of horns you sell.

I'm happy with the wig, but I just got the horns and it's NOT a headband. It's clip ons just like any other ones you see on cosplay sites, might as well buy from there tbh. They are super wobbly (slightest nod and they move).
I wanted and was expecting a headband since that was what they were categorised as, so they would stay in place with some extra stability. Since there is no solo picture for the horns it's impossible to see what type they are.
They also don't match what's shown in the picture. The ones in their picture are more "square" at the bottom, and they're straight on the inside just like powers horns are (ridiculously straight), but the ones I got are cone shaped and bent/curved.

So yeah I'd recommend buying the horns from someone else unless you're okay with this. 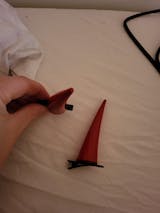 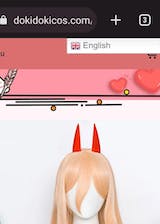