The order came very early and the quality is very good!

A
Ashley Di Bartolo
Just as shown, and even better!

I ordered my wig with everything else, the full costume (outfit, hat, and rings), and shoes. I'm amazed by the awesome quality of everything, truly. The outfit is suuuuper comfortable. And the details that some vendors may just sew together or embroidery, came as seperate solid pieces to clip on. The vision was also included, and I found it really neat that it lit up! If it wasn't because it's so obvious that it's a costume, I'd be tempted to wear it as normal clothing. The under shirt and shorts sure can be though. As well as the shoes, they're quite sturdy and would not give off the impression of costume shoes. The only thing I may be able to pick at are the rings that came with the costume. They aren't very accurate, and they're on the cheap side, contrary to everything else. Most of them broke apart after a few wears, even after I tried to glue them back together. But overall, shipping was quite quick, everything was ordered on September 9th, and arrived on September 25th, it just felt like forever because I was so excited, haha. Definitely would recommend, please give doki doki a try!
P.S. In one of the photos, it may looks as though the socks are quite lumpy, they aren't, it was cold, so I doubled up, the socks themselves (which were also included) are thin, breathable, and quite comfy. 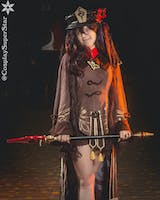